The Number of the Sun (Part 3)

How to draw a Geocentric Universe: (Make your own Heavens' Hinge, Part 3)

This exercise shows how to discover what "the Universe" might have meant for neolithic peoples, particularly in Southern England. It also teaches the concept of solar planes so may be suitable as a curriculum extra.


The exercise:
In parts 1 and 2, we drew a Geocentric Universe as it might have been seen by neolithic peoples. That drawing proved to be identical to Stonehenge's external layout of stones. In part 3, we'll use observation to try to record special features of solar movement about the polar axis. This drawing will end up being identical to Stonehenge's arrangement of outer sarsen stones in addition to matching up with all the external stone layouts. You do not need to be at the same latitude as Southern England for this part to work.

Equipment needed:
a) The stone layout generated by the experiment of Part 2
b) Two straight sticks approximately 5 feet long (as Part 2)
c) An inexpensive wood clamp (as Part 2: not strictly necessary but useful)
d) A set of checkers (draughts)
e) Spray paint or chalk

Timing:
a) Preferably done near the equinox (but not essential).
b) Make sure you've done exercise one  and exercise two first (and explained where the North Star is and what it is)
c) This Session can be done at any time; it takes about an hour

The method:
From the earlier experiments, the students will have noticed that the Heavens will revolve around them and they will have drawn the polar axis and the sun's movement. We are going to continue to draw that world exactly as the students would see it, and the students will see themselves as standing at the top of a circle (representing the World).
This was the part 2 drawing of the Universe drawn in stone: 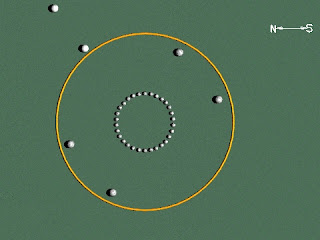 If you are drawing at a latitude of 51° , The North Pole is about 39° (90°–39°) anticlockwise from where you are standing. From the Long Man experiment, the students will have checked this.
We'll spray the lower stones (which represent the position of the sun at night) in paint or chalk and then add a dark and a light checker at the mid-way points to represent the celestial equator: 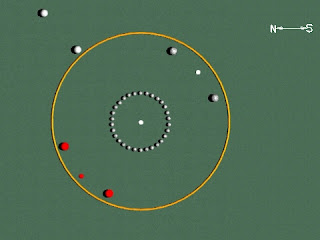 Then put half-way markers, of the opposite colour shade, between each solstice and equinox marker: 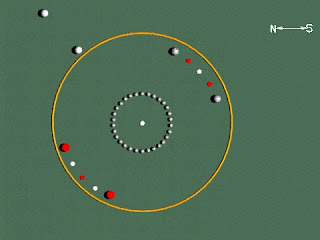 We'll now use our two sticks to measure the difference in angle between the summer solstice and equinox: This was 24° in 2500BC but, due to the Earth's orbital movement, this angle has now changed to 23.5°. It's worth checking that the angle you have really is 24° before continuing: 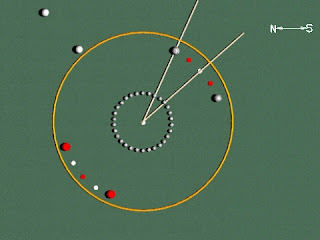 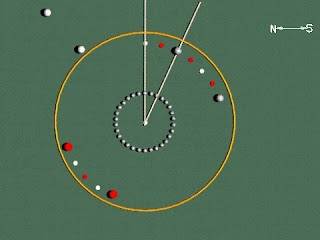 If we carry on, (each time rolling over the sticks, placing a checker and putting in another checker between the two sticks), the pattern fits exactly: The movement of the sun (48° in total) fits into 4 parts of a 30 part circle; each part being 12° (a total of 360°) 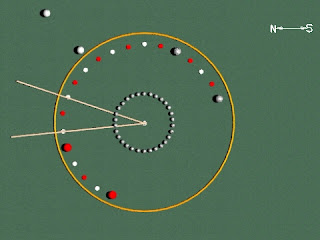 The line which represents the North Pole (or the South Pole) is exactly half way between two checkers (and two of the centre stones). In 2400BC, 30 stones could accurately describe the Sun's movement and the axis of the heavens: 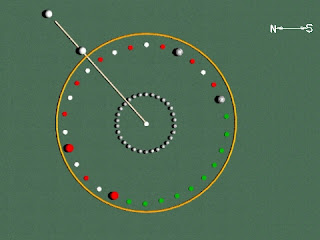 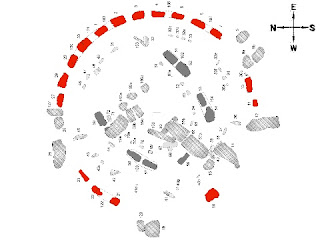 The spacing between the outer Sarcen ring stones is equivalent to 30 equally spaced stones and the polar axis passes straight between two of the stones. The diagram below is with fallen, missing, or purposefully unintended stones: 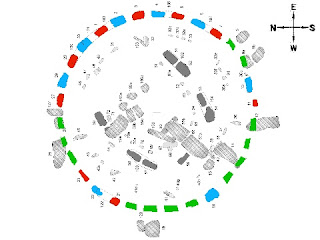 Post experiment discussion:
Background:
"Every time you get to five, count that five off using one finger on the right hand and close the left. When your hands are fully open, you have counted to thirty." From The Broken Stone and the secret of the Heavens' Henge.
From the earlier experiment, we saw that the Heavens appear to revolve around us. We have drawn that world exactly as it is seen: The experimenters will have seen themselves as standing at the top of a circle (representing the World).
(If you are looking towards the east, the top of your drawing will be to the east and the bottom will be to the west. If you were to draw yourself, you would be a small dot on the top of the circle. The rest of the universe is described from this 2-D arrangement.)