There lies in the Ocean an island....


A 'Geocentric' worldview is the idea that our World is fixed: The heavens revolve about us.

It is said that Aristotle and Ptolemy proposed different ideas of how the heavens revolved around our World. However, Diodorus Siculus, (Library of History Vol II Book2; Part 47) described a sacred precinct of Apollo lost to the pre-greek dark ages:

‘There lies in the Ocean an island no smaller than Sicily. This island, the account continues, is situated in the north and is inhabited by the Hyperboreans, who are called by that name because their home is beyond the point whence the north wind (Boreas) blows … And there is also on the island both a magnificent sacred precinct of Apollo and a notable temple which is adorned with many votive offerings and is spherical in shape … The account is also given that the god visits the island every nineteen years, the period in which the return of the stars to the same place in the heavens is accomplished.’ Diodorus Siculus, Library of History 2.47.

It will help to read this post first (Of Hyperion we are told....)
Imagine standing on a fixed geocentric world at a latitude of 51 degrees (Salisbury, England): This worldview can be represented by the solar planes (now 23.5 degrees either side of the Equatorial line, though 24 degrees in 2400BC), together with the blackness of the sphere which appears to revolves around the polar axis: 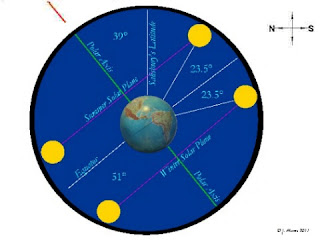 Take this vision of this World and look at the Winter Solstice; a solar position that happens to coincide with the raised mound around Station Stone 92 at Stonehenge - for detailed explanation see blog post Of Hyperion we are told: 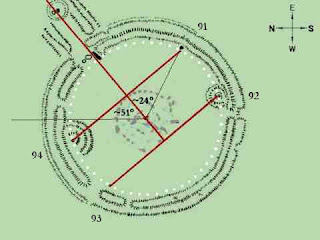 From the centre of the World (Point C), the Sun (S) is located along the solstice solar plane (dashed line). In the UK at winter solstice, it rises from the horizon by an angle of about 16 degrees: 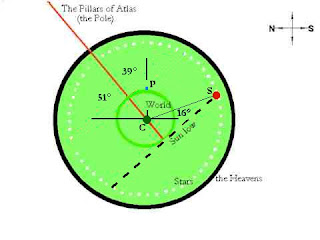 By standing on our world (at P) and drawing a horizon line to a south point H, we can show how high up the sun travels at the Winter Solstice: 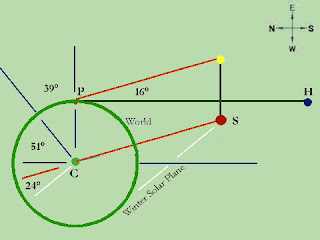 We can also define the moon at it's furthest lunar standstill. Every nineteen years, the Moon reaches it's major standstill in the Southern Hemisphere (at about 30 degrees from the equatorial plane in 2400BC). However, both the Moon and the Sun appear to eclipse; so those who believe themselves on a geocentric world, because they do not know if the Moon is in front or behind, might only define the Moon's line and not its exact position: 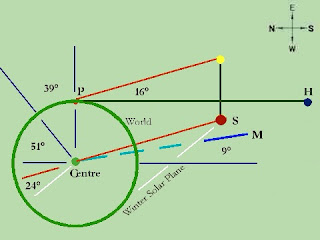 To represent the solar circle, we can draw a circle around the Sun showing its peak above the horizon: 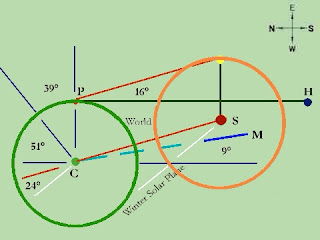 Now we'll draw this with dots: 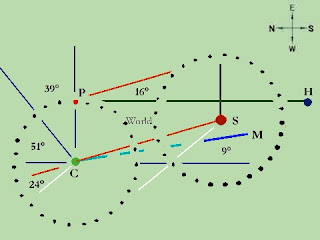 The Avebury Circle (near Stonehenge, England): 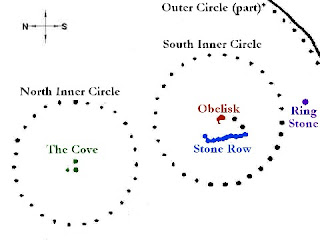