The alignment
It's well known that Stonehenge is aligned to the Solstices. At Britain's latitude, the winter solstice sunset is only just over two degrees different from the opposing direction at summer solstice. At Stonehenge, the hills to the north east make the sun appear just that little bit later, which means that the two events are even closer than you would find on a flat plain.

A posteriori evidence
There is evidence from places such as Newgrange that the solstices may have been important to some Neolithic people. Sunrise at winter solstice produces a beam of light which shines down the Newgrange passage.

However, Newgrange is a long way from Stonehenge. It was constructed hundreds of years earlier. It also looks nothing like Stonehenge. Stonehenge does not appear to do anything special with the beams of sunlight, so the best we can say is that Newgrange (and similar monuments which are known to have a solstice function) might provide a fairly weak (a posteriori) link if the monuments are of the same type. 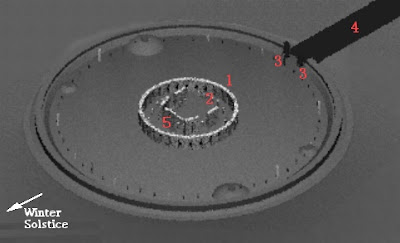 The odds
Stonehenge is aligned to solstice, but only in the same way that a house might also be aligned purely by chance. Turn it round forty degrees and it aligns east. Forty more and it meets winter solstice sunrise. There is at best a 1 in 60 chance that it points in a correct direction by chance and chance alone. Given that we are looking for something which shows what Stonehenge was for, our finding something (that fits with our preconceptions) reduces the odds to perhaps only slightly better than 50/50.

Is there anyone who knows of more proof or evidence that supports the solstice argument? I'm not against the idea; I just don't see the evidence.

Email ThisBlogThis!Share to TwitterShare to FacebookShare to Pinterest
Labels: Misc