Make your own Heavens' Hinge (Part 1)

A 'Geocentric' worldview is the idea that our World is fixed: the heavens revolve around us.

This exercise shows how the rotation of the heavens might be discovered and proved by earlier peoples, particularly in Southern England. It also teaches the concept of movement of the skies about the polar axis so may be useful as a supplementary exercise with explanations of orbital planes.

The exercise:
In this exercise, we are going to use observation to understand the rotation of the Heavens as it might be seen by neolithic peoples. You will end up with a new and unusual explanation for the Long Man of Wilmington.
Equipment needed:
a) Two or three straight sticks approximately 5 feet long (approx 1.5 metres)
b) String
c) A small woodworking clamp
d) Preferably a north facing slope (not essential)
Timing:
Best done between late autumn and early spring
Two twenty minute segments with one hour between, best done in an after school club
The method:

a: One way to prove that the heavens rotate is to get two sticks and point one of them so that it points to Polaris (which can be found from the details at the bottom of this page). If you are at a latitude of 51º, the angle of the slanted stick will be at 39º to vertical. The other stick is tied so that it can both rotate and point to one particular star or cluster: 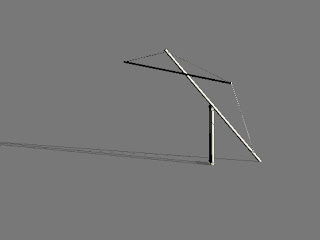 b: Then, looking up the Pole Star at night: If the rod is turned anticlockwise by 1/24th of a circle after one hour, like a backwards 24 hour clock, it will stay aligned to the same star: 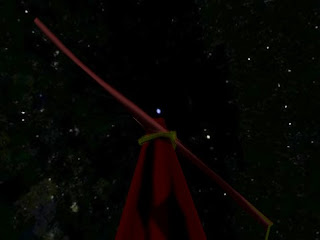 c: After one hour: 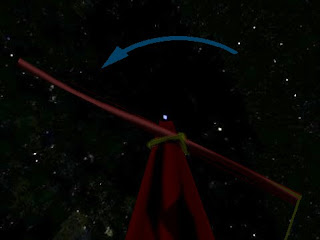 Even better, if you can find a north facing slope, you can stick the pole in the ground, use a cushion and look straight up the pole without straining: 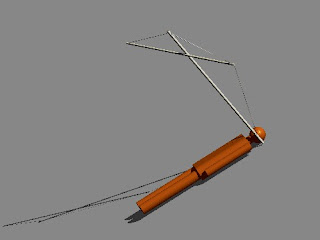 After experiment discussion:
Here is an easily found north facing slope at just the right angle to the North Star: 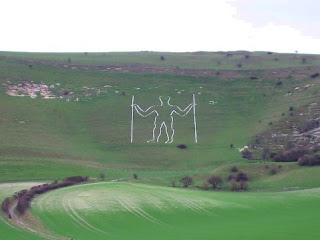 The above picture is of the Long Man of Wilmington, perhaps some 400 years old. Debate exists about its true age and whether or not the slope was artificially cut. Google Earth screen shot: 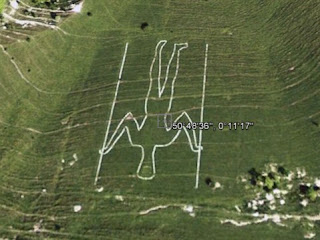 Link to: Part 2 of Make your own Heavens' Hinge (To draw the Universe)

'He had told the youngers that these [two] sticks could show them the nature of the universe.'  from The Broken Stone and the secret of the Heavens' Henge.
Over very long periods, the Earth 'wobbles' a bit in space making the position of the celestial poles vary. However, over our lifetime, the position will stay the same.
The stars currently rotate around Polaris: 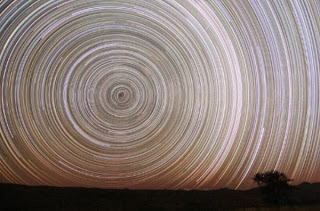 5000 years ago, the pole was located elsewhere (the polar position moves in a circle about the ecliptic pole returning to the same spot every 26,000 years). However, the position of the pole is currently at the pole star; Polaris: 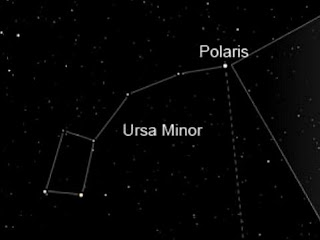 Polaris can be found by locating the Big Dipper (Ursa Major) and following the pointer at the end of the pan: 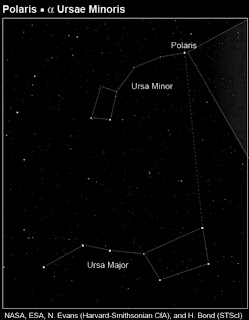