This post is about how to construct a 9 piece frame for a segment of a spherical mirror. For the sample frame I used 30cm x 30cm square mirrors from IKEA.

Spherical mirrors sets are part of a ball. Imagine you have an orange and you cut a small square out of it's skin: This small 'spherical' square is what we are trying to create. When flat plane mirrors are placed into this arrangement, it will form a segment of a sphere: See part 1 for an explanation of the maths and what's being done.

At first, I tried using shaped plywood and a 16 mirror frame: 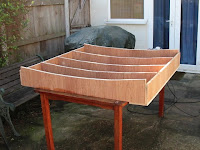 But fairly quickly discovered that in practice it wasn't easy to focus and that a 9 mirror frame would be far cheaper, simpler to construct and easy to focus. To make this, I first constructed frames out of 2” x 1” timber and then fixed pieces of plywood in the centre and either side to make it rigid. At the edges of each part of the central cross, I then placed another piece of 1” timber to raise the edge (where the clamps are in picture below): 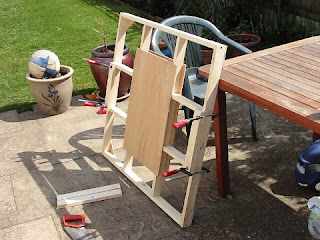 The next step  was to add blocks made of two squares of 1” timber to each of the corners to raise them to the second “level” (see part 1 for explanation). Over the top of this, I put compressible material: 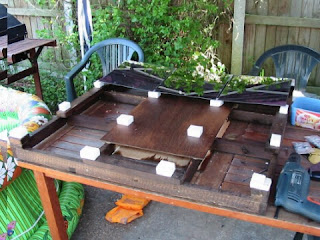 With that task done, the mirrors can be placed and fixed with screws: 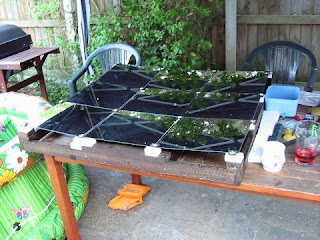 When done and the focus checked, the mirror frames can be stacked for use: 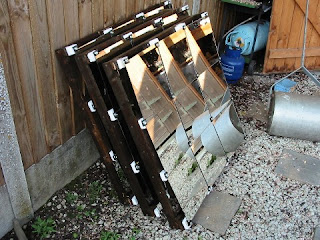 This is what the arrangement looks like when complete: 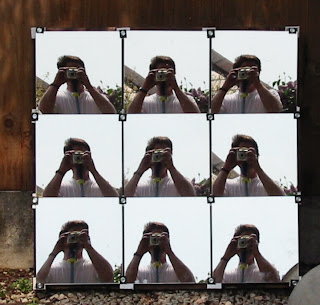 Note that each mirror has a slightly different “view” of the observer.

The detail & notes
Square mirrors are easy to get. However, other shapes can work as well and can work better than squares. If anyone plans to make this using cast metal, the preferred shape is likely to be an equal sided parallelogram known as a rhombus (and occasionally referred to as a lozenge). I'll describe why later if there's interest.

End Notes
I have hundreds of photos of the arrangement and how it was built. If there's anything you don't understand, let me know below and I'll add in some detail on how it was done.

Email ThisBlogThis!Share to TwitterShare to FacebookShare to Pinterest
Labels: Methods