Timeline: Metals and the Tin Islands

When Stonehenge was being designed & constructed, some evidence suggests that both copper and tin were being extracted and were either being developed (or already in limited use as tools) within the British Isles. Tin degrades in cooler climates so the only archaeological evidence remaining is likely to be in tin mining.

A possible time-line, based on the evidence below, is shown on this graph: 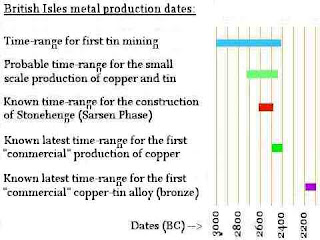 The Evidence:
The quotations below are extracted from the most recent information:

Stonehenge's timeline for the sarsen monument

"The dates from the antler picks have, of course, been used until now to date the great trilithon; the realization that they actually belong to another, later pit means that we can discard those dates from the construction sequence of the sarsen circle and the trilithons. Instead, the date of 2620-2480 BC for the sarsen-building is the one that counts."

"The earliest copper in Britain is found in Beaker burials, a new burial rite that appeared around 2400 BC.... But perhaps copper tools were already in use before the Beaker immigrants arrived, Copper must have been very valuable at first, so it is unlikely that people would casually let it fall into the kinds of places where archaeologists would find it. Copper tools would have been both highly prized and recyclable, so there's no reason why they would have ended up in the ground."

"When we dug into Durrington's henge bank we discovered that, whilst some of the chalk from digging the ditch bears the marks of antler picks, two chalk blocks have long thin, V-shaped cuts into them, as if they were made by the chopping of an axe. Yet the cuts are too think to have been formed by a stone axe. It seems likely that only a metal axe could have produced such a thin groove. We can date the ditch-digging to 2480-2460 BC so have a clue that someone was using a copper axe slightly earlier than expected."

"Another tell-tale is the change in tree-felling after about 2500 BC. Monuments prior to that date were constructed using timbers that were generally no thicker than 30 or so centimetres. After this date, we find monuments built of timbers up to about a metre in diameter. This change is perfectly shown in the size difference between the timbers used in the Southern Circle's first phase and those of its second phase. Perhaps what was special about that moment around 2500BC was that copper axes became available in sufficient numbers in Britain to fell much larger trees with greater ease."

Mining
"Wood found within the tin ground cannot have arrived there at the same time as the cassiterite, and it can hardly be doubted that Winn's oak trunk had been put there by man. It has been dated at the University of California, Riverside (UCR 1828), to 4140 +/- 100 bp, giving a time range of 3015-2415 BC. This is uncomfortably early, even if the precise calendar date lies at the end of the range. It suggests that tin streaming in Cornwall began much earlier than hitherto suspected."